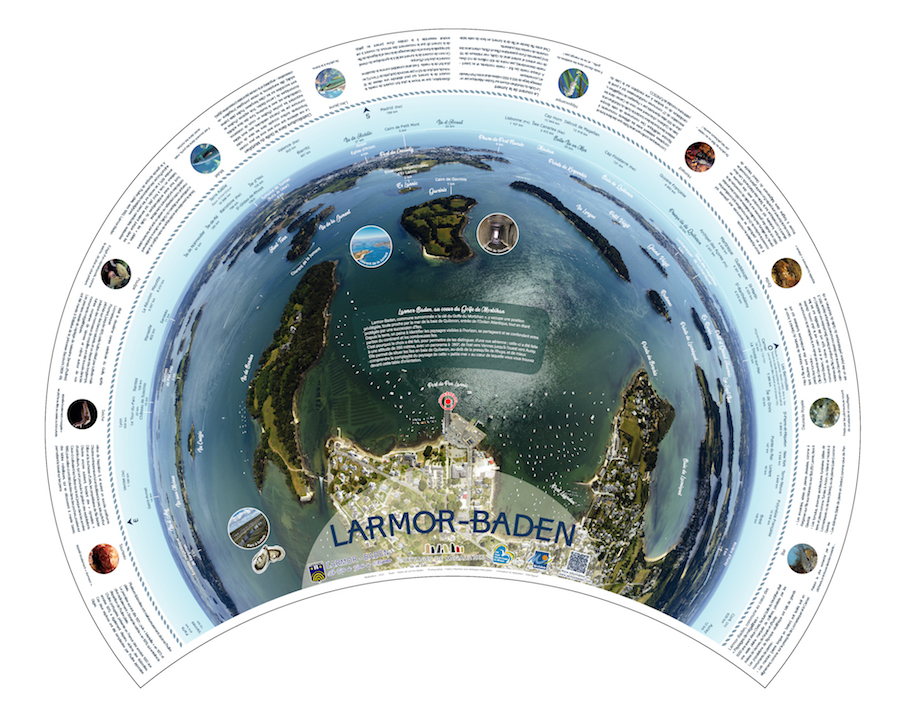 The installation of this table was decided after the major repair work on the mole (in depth, with the injection of resin to fill the voids that had been created over the years, and on the surface,  with the consolidation of the quays and the roundhead) have been completed in 2021. 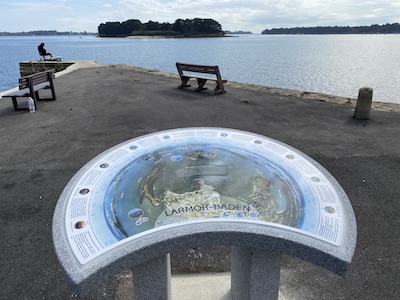 The table was installed on September 1, 2022.
The choice was made to install it almost at the end of the mole, thus exposing it to the onslaught of the sea, during high tides and storms.
Only materials resistant to sea water were thus retained : enamelled lava for the information panel and granite (grey from Louvigné, of Brittany origin) for the supports (top and feet); the only metal elements are stainless steel inserts, embedded in the bonding resin ensuring the junction of the various elements.

On the information panel, with a diameter of 120 cm in the shape of a 260° moon, there is a large photo taken in aerial view with a "fish-eye" lens, and information on the surrounding or more distant sites, and other characteristic themes of local interest have also been developed.
Their texts appear below, placed on the information panel in the center of the aerial photo for the first introductory paragraph and on the periphery for the other paragraphs.

Larmor-Baden, in the heart of the Golfe du Morbihan (Morbihan Gulf)

Larmor-Baden, a township often known as "the key of the Golfe du Morbihan", is located in a privileged spot, very close to the sea of the Quiberon Bay, the door to the Atlantic Ocean, also protected by a series of islands.
Looking at the landscape from the shore, it is hard to identify what is mainland and what are islands.
This is why an aerial view has been used to distinguish land and islands; it was made at 350 metre altitude with a 260° panorama from the East toward Vannes up to the West to Auray.
This allows you to locate the islands in the Quiberon Bay, beyond the Rhuys peninsula and to better understand the landscape complexity of this "little sea", in the centre of this panoramic table.

The aerial view in front of you shows the large share dedicated to oyster parks in our village, with oyster bags laid on metal stands.

Oyster farming and tourism are the two main economic activities of Larmor-Baden.
Three species of oysters were successively farmed on the French coasts : the flat oyster (ostrea edulis) called European, the cupped Portuguese (magallana -ex crassostrea- angulate) and the cupped Japanese (crassostrea gigas).
The flat oyster is the only endemic species in our region, but it has pratically disappeared from the Gulf.
However, its farming has enduringly marked our landscape as can be seen by the many oyster workshops lining up along our coastline.
The "plates" wooden boats with a flat bottom typical of this region, were used up to the 1970's, to work on the oyster parks; today they are being restored by nostalgic fans.

At the great time of flat oysters around 1950, Larmor-Baden was the second oyster centre in the Golfe du Morbihan after Locmariaquer.
However, for a very long time (until 1870) oysters were not actually farmed but were collected on natural sea beds; piles of shells were found in Vannes Roman ruins and around megalithic monuments.

The first attempt to collect oyster larvaes (spat) was made by Princess Bacciochi (1806 - 1869 Napoleon's I niece) and had a posthumous success.
Other entrepreneurs followed, like Arthur Dillon and the Duchess of Uzès, owners of the Berder Island. And subsequently, several "dynasties" of oyster farmers developed the activity.

They used to raise oysters on the sea bottom. Then around 1980, they started putting oysters in mesh bags placed on metallic stands ("tables") which uncover at low tide, faciliting greatly the work on the parks.

Unfortunately, several epizooties decimated the flat oysters.
The first one occured in 1921; the second one "Marteilia" in 1973 and the third, more lethal "Bonamia Ostre" in 1978, which led to the extinction of the flat oyster.
The Portuguese oyster, cultivated in France from the 1920's to the 1970's, also disappeared victim of epizooties.
Both species were replaced by the Japonese Gigas oyster.

Larmor-Baden, a village in the heart of the "Megalithic landscapes"

7000 years ago, the Golfe du Morbihan was a vast plain with hills, crossed by the rivers of Vannes, Noyalo and Auray.
The neolithic populations built large stone monuments:

The most famous tumulus ("cairn") is located on the Gavrinis island (visit possible), a part of Larmor-Baden. Other monuments of the same type were identified on the neighbouring islands of l'Ile Longue and Berder (private islands, without visit).
The cairn of Gavrinis has been classified as an "historic monument" since 1901; it is one of the prehistoric jewels of the Golfe du Morbihan, with no equivalent in the world.
It is particularly famous for its unique engravings covering the surface of 23 of the monoliths which make up the walls.
In addition, excavations carried out in the early 1980's showed engravings on the stone slab covering the funerary chamber, which line up with the engravings on the Table-des-Marchands at Locmariaquer. Both blocks together make a part of a gigantic menhir which may have been previously aligned with the Grand Menhir of Locmariaquer. This confirms that strong and complex connections have existed between different monuments at the neolithic era.

Monuments of that period exist in all places around the Golfe du Morbihan and the Bay of Quiberon. With those of Carnac, they are part of the 550 sites listed by "Paysages de mégalithes" (Megalithic lanscapes), an association of 27 cities in Morbihan which applied to be included in the UNESCO World Heritage List.

NB : this chapter has only been partially treated on the table, fot lack of sufficient space, limited to a few aquatic species, with their photos; it is developed completely below.

Underwater, many species take advantage of the shallow waters of the "little sea".

The Golfe du Morbihan opens into the Atlantic Ocean trough a 1000 metre wide pass between Port-Navalo and Locmariaquer.
At each tide (flowing and ebb) more than 400 million tons of sea water move in and out of the gulf, which is a 45 square miles inland sea scattered with about 40 islands and islets, thus creating very powerful tidal currents.
The strongest current ("Jument current") flows between the Berder island and the Jument island (in front of this orientation table). It may reach the speed of 9,1 knots, that is over 10 mph, at the height of the tide.
It is thus considered the second strongest stream of Europe.
The name "Jument" (Mare) is a symbol which refers to the strength and the wild side of a horse; the legend of the Jument island says that the swirls generated by the current look like the mane of a galloping mare.